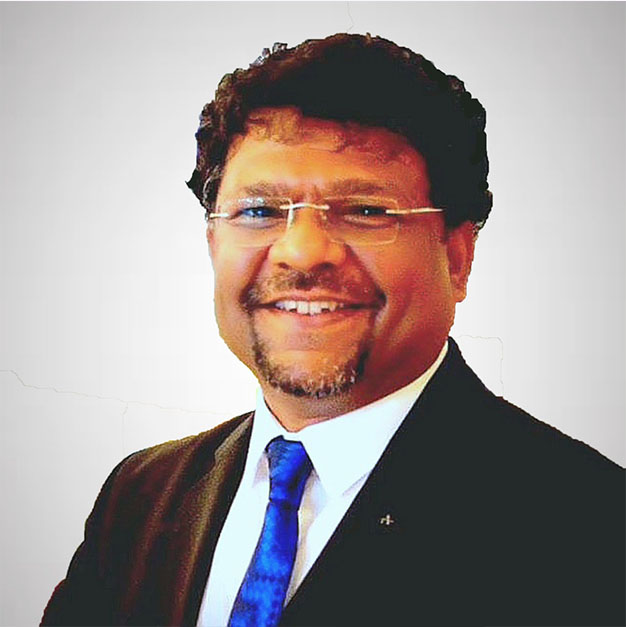 David Istacky serves as the Managing Trustee of The Good Sam Foundation.

He has over 26 years of corporate experience, spanning business and human resource functions in the corporate sector in India and across several other countries. He is a Certified Executive Coach and runs his own boutique HR Consulting firm that focuses on Leadership Coaching & Talent Advisory Services.

David felt drawn to support social causes right through his corporate career and did so in personal capacity. This brought him face to face with the sufferings and the hardships of people with disabilities, the weak, the vulnerable and the marginalized. This exposure spurred him to launch The Good Sam Foundation in 2016.

Under his leadership, the Good Sam Foundation is emerging as one of the most promising new NGOs in the disability space in the country. 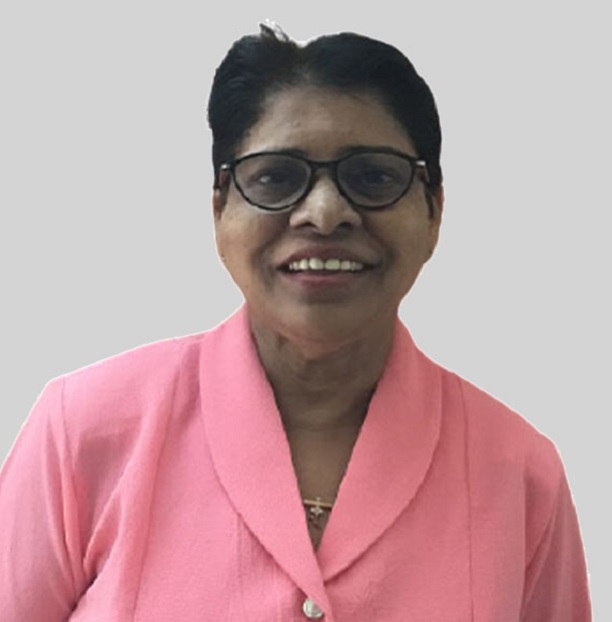 Nelly Prichard serves as a Trustee of the Good Sam Foundation

A former real estate professional, she took up social work out of a burning desire to help the afflicted. What began as little acts of kindness soon turned into a 24/7 initiative toward society. From fighting cases for the unrepresented to helping rehabilitate the disabled, she has been at the forefront of it all, tirelessly toiling to positively impact those in despair.

In 2016, after watching a news coverage on the horrors of the Endosulfan mishap, she made it her mission to seek out the Ministry of Health and with the help of benefactors managed to rehabilitate over 1600 victims across numerous districts in Karnataka.

At the Good Sam Foundation, Nelly continues to work with people across disabilities and the socially oppressed, building bridges to see them through. 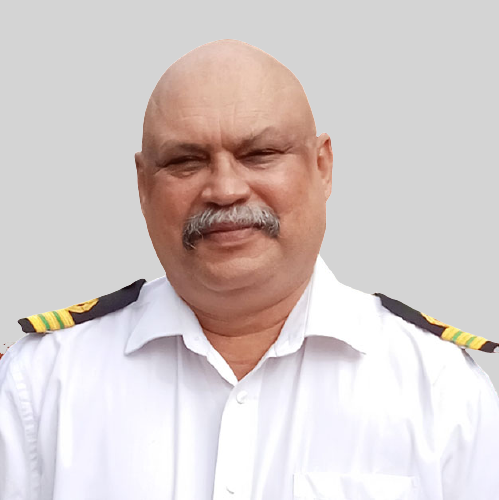 Elstan A. Fernandez is a Trustee with The Good Sam Foundation.

He is a Marine Electrical Engineer by profession, a Veteran Submariner and a Seafarer with a distinguished service record with the Indian Navy. He has represented India in several countries, through the Indian Navy.

Elstan is also a person of many accomplishments, he is an Educationist, World #1 Author - Marine Engineering Education, Rotarian, Philanthropist , Start-up Specialist, Toastmaster, Youth Mentor, Member of Leaders Excellence - Harvard Square (USA) and he also serves as an Advisor to the Promising Indian Society, after being awarded the Promising Indian of the Year in 2017.

Having received a lot of support over the years to be where he is today, Elstan feels that supporting the less fortunate is his true calling. He began his quest of giving back after he was touched by a little orphan at Mother Teresa's Home for the dying destitute more than 30 years ago. Since then, he has worked as a volunteer for Mother Teresa's Missionaries of Charity, St. Don Bosco's - Street Children program as a Corporator, he started his own scholarship program for children and a support system for needy senior citizens. He has been a benefactor of The Good Sam Foundation since its inception before coming on board as a Trustee in 2021. 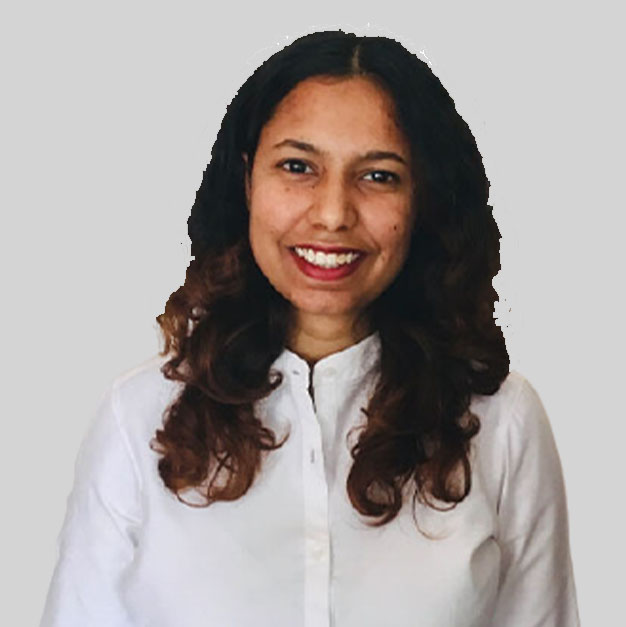 She holds a Masters degree in Social Work, with a specialization in Community Development from School of Social Work, Roshni Nilaya, Mangaluru, She also holds a Post Graduate Diploma in Social Entrepreneurship.

As a student, Eden made the best of opportunities that she came across to volunteer or intern in the social sector. Her experiences at NGO's like World Vision India, BalaJanaagraha and a few others fueled her interest to pursue a career that serves the vulnerable sections of society through the Social Sector.

After her initial stint at Christel House India, Eden came aboard The Good Sam Foundation where she plays a very pivotal role in seeing various programs through. 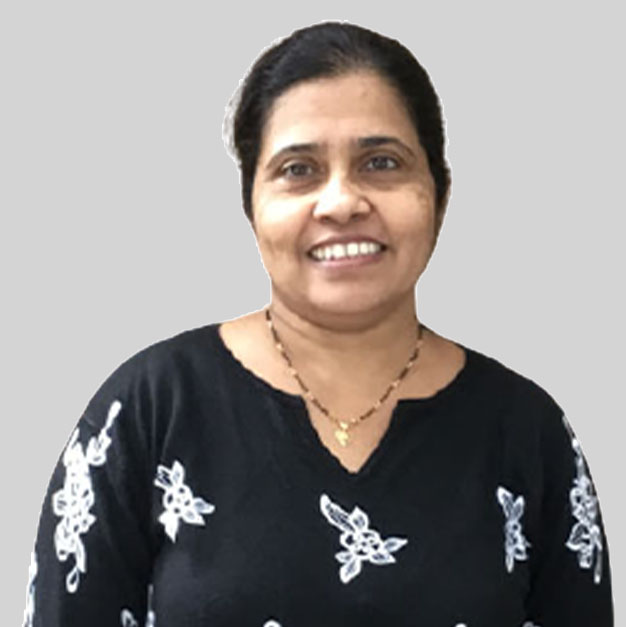 She has over two decades of nursing experience and has worked closely with leading surgeons and doctors in India and the Middle East.

Mary works very closely with surgeons and consultants on our advisory board to address the needs of those with Pressure Ulcers, Diabetic Ulcers, Venous Ulcers, Leprosy Ulcers, Burns and other non-healing wounds.

Besides being responsible for our SparshaGuna Physiocare and Wellness centre, Mary has travelled across many of our rural projects to assist with wound care.

Her commitment and tender care helps our beneficiaries recoup and regain their health quickly. 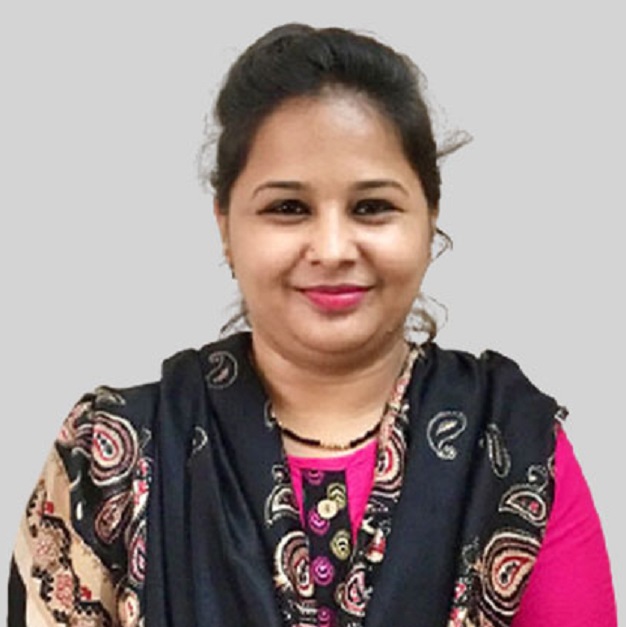 Heera manages our Vocational Training Center for Women with The Good Sam Foundation.

Heera serves as a Tailoring Instructor with us. She started out as a student at the Roshini Center a few years ago and then pursued to hone her tailoring skills with a Boutique.

Over the years Heera has emerged as a shining example of grit and determination to many women. Besides being a good wife and mother of two children, she comes across to others as a motivator, a friend and a persistent instructor who goes the extra mile for her students.

She is a keen learner and continues to innovate and improve the program and the centre and is good example of an old saying “The Student has become the Master”. 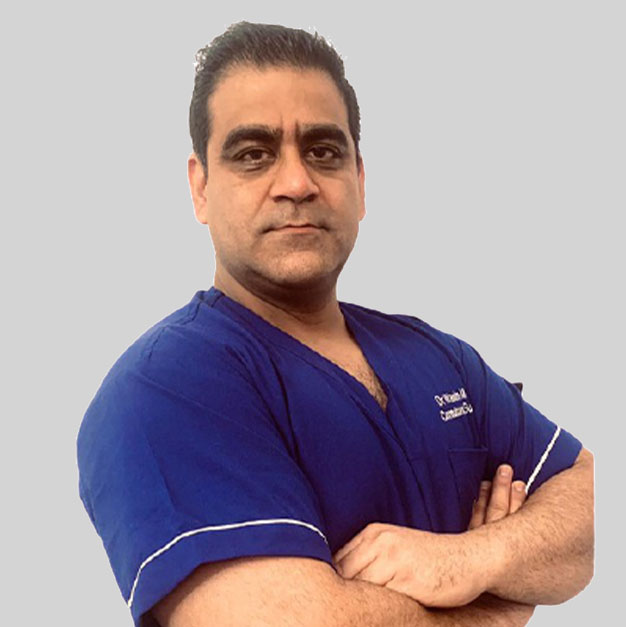 Dr. Wassim Dar, serves as the Chief Medical Advisor on our Advisory Board

He also serves as a Consultant and a General and Vascular Surgeon, at several hospitals in Bangalore and has various research publications to his credit across national and international journals.

Dr. Wasim is an expert in treatment of chronic wounds and all kinds of ulcers. He also specializes in laparoscopic surgeries and laser surgeries.

He has heart for service and has contributed immensely to the lives of people at the bottom of the pyramid. His services have been a blessing to our beneficiaries and many others.

Dr. Wassim Dar has been associated with The Good Sam Foundation for over 5 years. 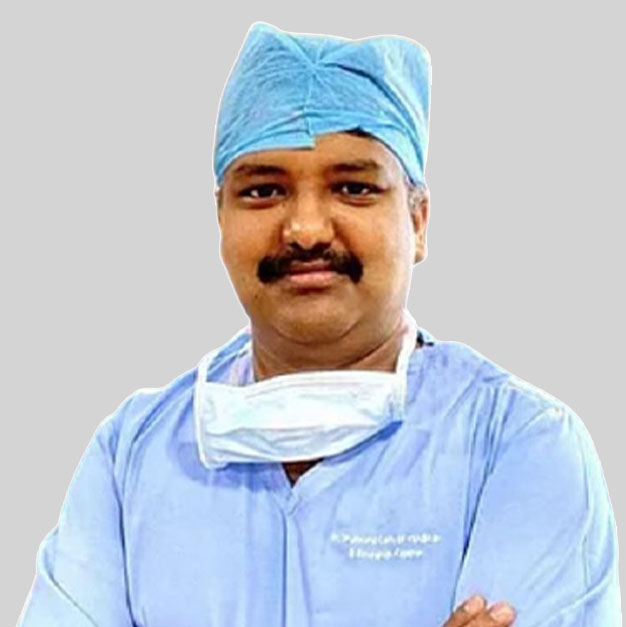 Dr. Pradeep Kumar, serves as a Technical Advisor on our Advisory Board

Dr. Pradeep is an accomplished plastic surgeon who believes that Diligence makes a surgeon good. He comes across as very meticulous in his approach, adept with his surgical skills and sound with his management principles. He is a very receptive and innovative person and his quality and craftsmanship are unparalleled.

Having developed a passion for chronic wound care and diabetic foot management, Dr Pradeep has set up dedicated wound care centers at Rangadore Memorial Hospital, Venlakh Hospital and Kanva Sri Sai Hospital Bangalore and has made these facilities available to The Good Sam Foundation. These centers aim to provide high end wound care at affordable costs. 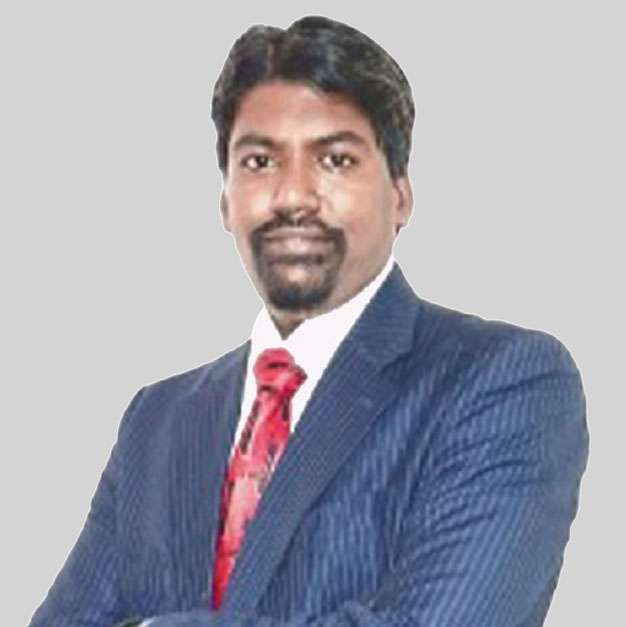 Dr. Reuban Daniel, serves as an Advisor - Disability Solutions on our Advisory Board

Dr. Reuban Daniel is a professional Physiotherapist. He has a Master's Degree in Physiotherapy, Musculoskeletal Rehab and a Bachelors in Physiotherapy from CMC Hospital Vellore. He also has a Certification in Spine Manipulation.

Dr. Reuban has been developing caregivers and other resources at the grass root level for community-based inclusive development since 2008. He has contributed immensely to the Rehabilitation of People with Spinal Cord Injuries, Early Intervention of Children with Special Needs, Assistive Devices and Community Accessibility Projects that build accessible environments for people with disabilities. He was part of a Scotland Exchange Program, which has helped him immensely in building sustainable community integration programs.

Dr. Reuban heads a start-up NGO called PACT INDIA that works uniquely in bringing change to the ecosystem that supports Children with disabilities who are either Orphaned, Abandoned or Surrendered and they work closely with various child care institutes. 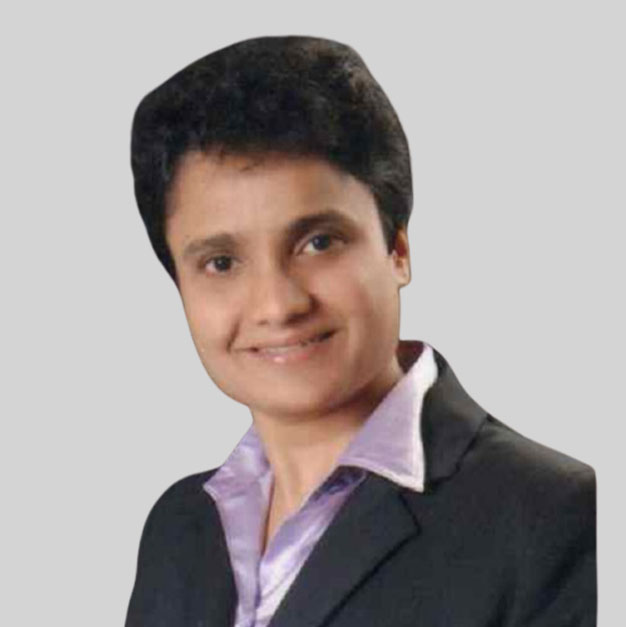 Sheryl Colaco serves as a member of the Advisory Board .

Sheryl is a passionate wound therapist who has served people with all kinds of ulcers and non-healing wounds and seen them make great recoveries over the years.
She is a person with great commitment and boundless energy. Her contributions to the Good Sam Foundation have been invaluable and she has helped establish and expand our wound care program across several districts of Karnataka.

A few years ago, she had volunteered her service at the wound care department of the Boston City Council at the Massachusetts General Hospital.

Sheryl is also the MD, of Colaco & Valerie Pvt Ltd, a company that manufactures Ayurvedic medicines.

Sheryl is a member of the Advisory Board of The Good Sam Foundation, a person with great commitment and boundless energy. She has played a key role in guiding and supporting our wound care program. 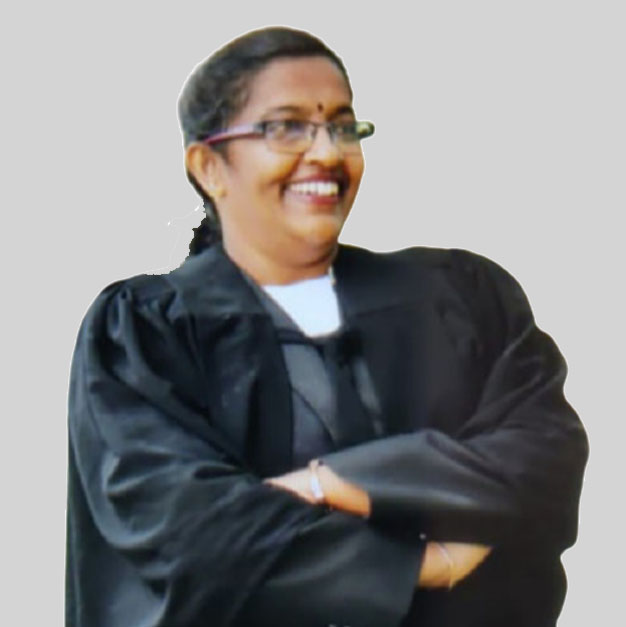 She has a B.A. LLB degree and a Gold Medal for Commercial Law in her LLM degree. She represents her clients at the Trial Court, High Court of Karnataka, Bengaluru and the Supreme Court and has handled various types of civil and criminal proceedings thorough her own firm, JVA Global Associates.

Adv Ransa has an intimate understanding of the challenges posed in cases related to women and children and has handled several domestic violence cases too.

She also serves as a professor of law at a few prestigious law colleges. This gives her an opportunity to influence young aspiring minds who go on to make a difference to the citizens of our nation. 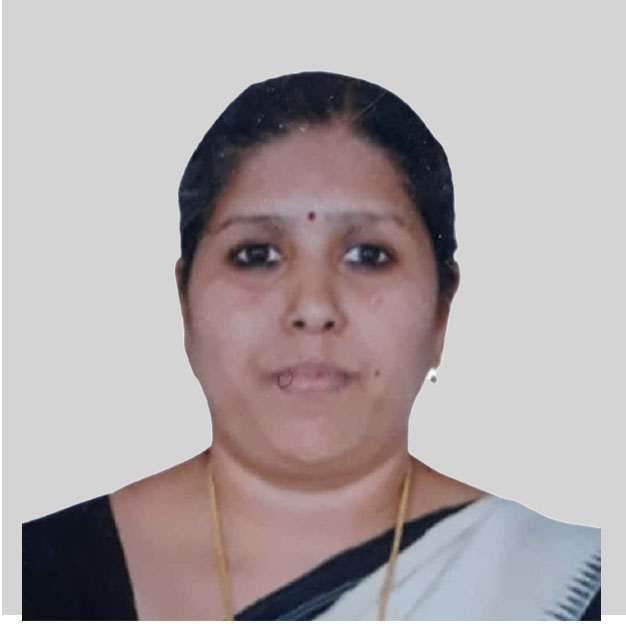 Alphonsa Joseph serves an Advisor - Child Services on our Advisory Board

She is an Associate Professor and Head of Psychology at Dr. S.R. Chandrasekhar Institute of Speech and Hearing. She is also a Student Counsellor and an NSS Officer.

She has a M.Sc. degree in Child Guidance and Counselling from Bangalore University and she has been trained by John Hopkins University in Psychological First Aid.

Alphonsa has nearly two decades of experience in assessment of development disorders with children and parental counselling. She has contributed immensely to the development needs of children with disabilities through path breaking early intervention strategies.

She was also instrumental in setting up a school for children with Autism Spectrum Disorders and has intensive clinical and research experience in training on parenting styles and effective parenting.

She also conducts awareness and teacher training programs and her research work has been featured in publications related to interventions for children with special needs.